You are here: Home / Travel / Trek to Pandava Caves on Karol Tibba

Pandava Caves are located on mount of Karol, a mountain between Solan and Kandaghat. It is a short, sweet and steep trek which can be done in half a day.

Last Saturday, November 22, 2014, I made a spontaneous decision to do it on Sunday. I called a few friends to check if anyone else was interested since I think some company on such treks is good to have unless you are the kind who can speak to yourself for hours. Not many showed interest so I decided to go alone.

I called it an early day so that I could leave early in the morning. It is a two hours’ drive from Chandigarh to the point where you start the hike. I was pleasantly surprised by a phone call from the friend who confirmed he would tag along in the morning. 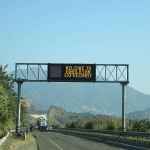 Sunday, November 23, 2014 started early. By the time I was ready Nitin, a dear friend who had called the last night reached right on time and by the time we were sitting in the car, another friend called. This one had declined initially, asked if we had not left she would like to go along. By 8:00 am we were on our way to Kandaghat, where we were supposed to park our car and start the hike.

We stopped at Modern Dhaba, Dharmapur on our way for some awesome ‘tandoori Gobi Paranthas’ and tea. Our next stop was Sawhney Petrol Pump at Kandaghat. I parked my car and the pump owner, Arun Sawhney, a dear friend was kind enough to drop us at the starting point. 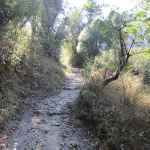 The fun began at 11.20 AM. The trail is reasonably steep from the start. 20 Minutes into the hike, I am sure my trekking companions were re-thinking their decision to join me on this one. We took our first pit stop about 20-25 minutes near a small temple. From here on, it was like everyone had adjusted and we started climbing at an even pace. Even though one can identify the trail all through, there are several forks and one has to be careful to take the right one. My rule of thumb, take the one that is going up.

The trail becomes narrow and vegetation dense, as we climbed up. Look at the pictures to see what I am talking about. We reached the caves in less than two hours. We sat in the sun watching the landscape all around. One has to see it to believe it.

There is a small temple next to the entry to caves. One is obliged to go to the Temple before entering the cave. Hari Prasad and his wife are the care takers of this place. 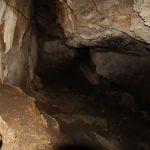 We entered the caves after paying our respects at the temple. The first disappointed happened, when the torch I brought failed to work. We decided to go on anyways using our phones and camera flash. We went about 100 meters inside the cave. It was pitch dark and damp and very cold from this point on. Considering we were without shoes, (one has to take them off before entering the caves, and anything else which is of leather, this includes, belt and wallet) and light we decided to return.

We spent some more time basking in the sun outside before starting our hike downhill. Arun had advised, we can take the railway track and follow the track to Kandaghat on our way back since it’s a very picturesque trail. We decided to do this. We took a diversion a little distance from the starting point and got on to the narrow gauge railway track. It indeed was a nice trail.

We reached Kandaghat railway station. From where Arun picked us. We had a nice cup of coffee back at the Petrol Pump and were on our way back to Chandigarh.

Here are some myths and facts about the place:

Myths: The caves were inhabited by the Pandavas during the period of their exile. (I believe it is a myth)

Fact: The Caves are actually several Kilometres long and reach Pinjore at the other end. Scientific experiments have been done to prove this like pumping colored water into the cave which came out at several places in Pinjore. 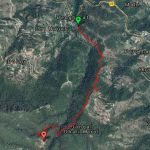 Facts about the Trek:

If you plan to do this trek and have questions, feel free to shoot me an email. (Click on the thumbnails to see enlarged pictures. )