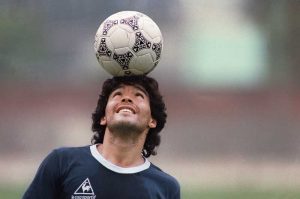 Diego Maradona, the football legend, died due to a cardia arrest in his house in Argentina on Novermber 25, 2020. He was 60 years old. The news of Diego Maradona’s death left the world in a state of shock.

Maradona lived his life to the fullest after achieving trophies and accolades in both club and international football. Maradona has been one of the most controversial football players of the world. Few players mastered the spectacular quite like Diego Maradona. From stunning free-kicks to winding dribbles, the Argentine, scored some of the most famous — and thrilling — goals in football history.

Maradona came into limelight with the infamous ‘Hand of God’ goal during Argentina versus England match in the 1986 FIFA World Cup at the Azteca Stadium in Mexico City. The goal eliminated England from the 1986 World Cup. According to rules, Maradona should have received a yellow card for clear handball but due to lack of technology, the referees didn’t get a clear view of the play and the goal was awarded to Argentina as they went on to win the match 2-1 with both goals scored by Maradona. His second goal in the match is regarded as the “Goal of the Century”. Maradona helped Argentina win the world cup in 1986.

He was managing an Argentine club, Gimnasia de La Plata. He played club football for Boca Juniors, Napoli and Barcelona among others and was adored by millions all over the world for his brilliant skills. He spent two years at the Nou Camp before heading to Napoli, where he spent the next seven seasons and scored over 100 goals.
Maradona inspired Argentina to the 1990 final but lost to Germany. In 1994 — after an infamous, eye-bulging goal celebration against Greece — he failed a drugs test and was sent home in disgrace.

His trophy-laden career was tinged with controversy because of drug and alcohol addiction. Excesses with drugs and alcohol had long taken their toll on Maradona’s health. He was admitted to hospital three times in the last 20 years for serious health issues due to his addictions. He almost died of cocaine-induced heart failure in 2000 and underwent years of rehabilitation.

In 2000, FIFA ran an online Player of the Century poll. Maradona gained 54 percent of the vote and Pele was second with 18 percent. FIFA declared them joint winners.

In recent years, Maradona, reduced to hobbling by the ravages of his career and lifestyle, had coached in the UAE, Mexico and Argentina without ever hitting the heights of his playing days.

Despite his fair share of controversies, Maradona was hailed as one of the majestic footballers to have graced the football pitch and his left-foot is still admired by many elite footballers.

As a football player and a fan, I have been a great fan of Diego Maradona. One of his famous quotes were

“Che Guevara, my Argentine hero, whom I carry tattooed on my skin and even more in my heart. He is a rebel. I am one as well.” — Maradona

That magic of Maradona is immortal..It will remain forever! Yes, you will stay forever in our heart ………… Rest in peace Diego Maradona