You are here: Home / Random Ramblings / Do You Suffer From the Dunning-Kruger Effect? 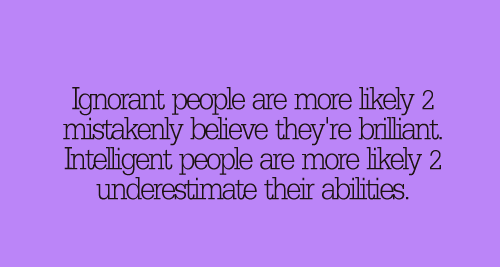 One of the painful things about our time is that those who feel certainty are stupid, and those with any imagination and understanding are filled with doubt and indecision.

Lately as I noticed people, I have come to conclude perhaps a large number of people suffer from Dunning-Kruger effect.

What is Dunning-Kruger Effect?

The Dunning–Kruger effect is a cognitive bias in which unskilled individuals suffer from illusory superiority, mistakenly rating their ability much higher than average. This bias is attributed to a metacognitive inability of the unskilled to recognize their mistakes.

Putting is simply; studies by David Dunning and Justin Kruger suggests that ignorance of standards of performance is behind a great deal of incompetence. The phenomenon states that for a given skill, incompetent people will:

The flip side of this is actual competence may weaken self-confidence, as competent individuals may falsely assume that others have an equivalent understanding. Also because the competent people have required skills and aware of performance standards they would know of the pit falls that a particular task may entail.

Ignorance more frequently begets confidence than does knowledge as said by Charles Darwin. And Shakespeare put it as “The fool doth think he is wise, but the wise man knows himself to be a fool.”

So, I believe many smart people in history realized this way before me. Feel free to leave your comments below about what you think about this theory?