You are here: Home / Defense & Strategic Studies / Battle of Saragarhi – One of World’s Greatest Last Stands

Battle of Saragarhi is an incredible story of 21 men of the 36th Sikh Regiment of British Indian Army who fought against 10000 Afghans in Saragarhi. It is considered one of history’s great last stands by historians around the world.

A series of posts were setup by Maharaja Ranjit Singh during his western campaign. After the annexation of Punjab by British in 1849 these posts were taken over by British. Saragarhi was a communication relay post between Fort Lockhart and Fort Gulistan (also known as Fort Cavagnari) in the Sulaiman Range, what now is the NWFP in Pakistan.

On the fateful morning of September 12, 1897 these 21 Sikh soldiers were up against more than 10000 Afridi and Orakzi tribes of Pashtun who attacked this small communication post.  Havildar Ishar Singh (the detachment commander) peered through his binoculars from the watch tower of his post, he saw columns upon columns and rows upon rows of Pathans. Sepoy Gurmukh Singh, the detachment signaler, went up the signaling tower to set up his heliograph and began signaling to Fort Lockhart about their predicament: “ENEMY APPROACHING THE MAIN GATE…NEED REINFORCEMENT”. Lt Col Haughton, Commanding Officer of the 36th Sikhs, attempted to rush his troops to assist the outnumbered Sikhs however it was too late. The Pathans had systematically cut-off the supply route between Fort Lockhart and Saragarhi. Fort Lockhart transmitted back: “UNABLE TO BREAKTHROUGH…HOLD POSITION”.

As he watched from Fort Lockhart, Haughton counted at least 14 enemy standards (each representing 1,000 tribesmen) facing the 21 Sikh soldiers. Sepoy Gurmukh Singh passed on this message to Havildar Ishar Singh. As he assessed the grim situation facing him and his men, Havildar Ishar Singh called upon his men to seek their consultation on whether to hold the fort or abandon their post in the hope of surviving. The Sikhs unanimously agreed to hold the position. Saragarhi flashed back: “UNDERSTOOD”.

A devout Sikh and fatherly figure to his unit, the troops under Havildar Ishar Singh’s command knew full well the ability of this NWFP veteran. Havildar Ishar Singh understood this terrain very well, especially the character and fighting ability of the Pathans. As the Pathans moved to begin their attack, one of the Sepoys sounded the bugle as per Havildar Ishar Singh’s command and the Sikhs formed two lines abreast, one row in a squatting firing position and the other standing. Havildar Ishar Singh held his order to fire until the enemy closed in within 250m from his post. The .303 calibre was deadly and effective at this range, coupled with the grouping shots formed by the line abreast formation. The first line of the Pathan advance was completely decimated. However, there was no time to reflect upon their success.

The Pathans planned for a massive assault on all flanks – a multi-pronged attack designed to divide the outnumbered Sikhs into much smaller groups. The tribesmen attacked in two formations, one towards the main gate and the other towards the gap at the fort. Undeterred, Havildar Ishar Singh yelled their regiment battle cry together with his troops “JO BOLEY SO NIHAAL! SAT SRI AKAAL!” Whoever utters the following phrase shall be fulfilled! True is the timeless being! The tribesmen’s attack was repulsed once again by the Sikhs. At this stage some tribesmen had fallen just yards away from the Sikh position.

The Sikh soldiers’ ranks and ammunitions were now beginning to dwindle. Out of the full strength of 21 soldiers at the start of the battle, there now were 10. The battle had gone on from 0900 hrs to 1200 hrs with the Sikhs having fought off seven charges by the tribesmen. The ever inspiring Havildar Ishar Singh was still leading his men despite being gravely injured by bullets and sabre slashes. At 1400 hrs, Sepoy Gurmukh Singh signaled Fort Lockhart Battalion HQ: “LOW ON AMMO…NEED AMMO…URGENTLY”. Lt Col Haughton attempted to send his personal orderly to try and pass the ammunition to the trapped Sikhs, but again to no avail. As the Pathans attacked again, the Sikhs with less than 10 men put up a stiff resistance and managed to repel the attack once again.

The tribesmen resorted to a traditional tactic. They set fire to the bushes and scrubs around Fort Saragarhi. Clouds of smoke blanketed the fort, making it impossible for the Sikhs to see the enemy. Soldiers at Fort Lockhart could clearly see the approach of the tribesmen due to their elevated position above Saragarhi. Lt Col Haughton frantically signaled Saragarhi: “ENEMY APPROCHING…THE BREACH”. Havildar Ishar Singh was severely injured by this time and ordered the remaining Sikhs to fall back into the inner wall. He then ordered two Sepoys to drag him towards the breach to buy some time for his men. Out of ammunition all three of them fixed their bayonets and charged the tribesmen. With this act Havildar Ishar Singh provided the final lesson of true leadership to his men.

By the time the tribesmen breached the fort, only five Sikhs remained alive. Four in the inner building and Sepoy Gurmukh Singh at the signaling tower. The Sikhs did not give up. Instead they formed an all-round defensive position with their backs against each other and their bayonets pointing outwards. In this remarkable display of bravery four more Sikhs fought hand to hand inside the fort.

At 1530 hrs Sepoy Gurmukh Singh transmitted: “MAIN GATE BREACHED…DOWN TO ONE…REQUEST PERMISSION TO DISMOUNT AND JOIN THE FIGHT”. Orders came back: “PERMISSION GRANTED”. Sepoy Gurmukh Singh disassembled his heliograph device, picked up his rifle and came down the signaling tower to join the fight. Soldiers at Fort Lockhart saw him disappear into the thick of battle right into the tribesmen line. His last words echoed “JO BOLEY SO NIHAAL! SAT SRI AKAAL!” Sepoy Gurmukh Singh, the youngest of the Sikhs at 19 years old was credited to have taken down 20 tribesmen single-handedly before succumbing. He was the last to fall at Saragarhi.

The post was recaptured two days later by another British Indian contingent.

In addition to the 21 Sikh dead, reports of Pashtun losses range from between 180 and 600, though it’s difficult to discern the true number accurately. That said, it was probably at least 180 as that is what the Pashtuns themselves later reported as their losses in that battle.

As information about this reached Britain, the parliament rose to give standing ovation to these brave soldiers. All of the martyred soldiers were decorated with the highest military honours, The Indian Order of Merit.

It is no exaggeration to record that the armies which possess the valiant Sikhs cannot face defeat in war – Queen Victoria, British Parliament 1897

The modern Sikh Regiment continues to celebrate the day of the Battle of Saragarhi each 12 September as the Regimental Battle Honours Day. 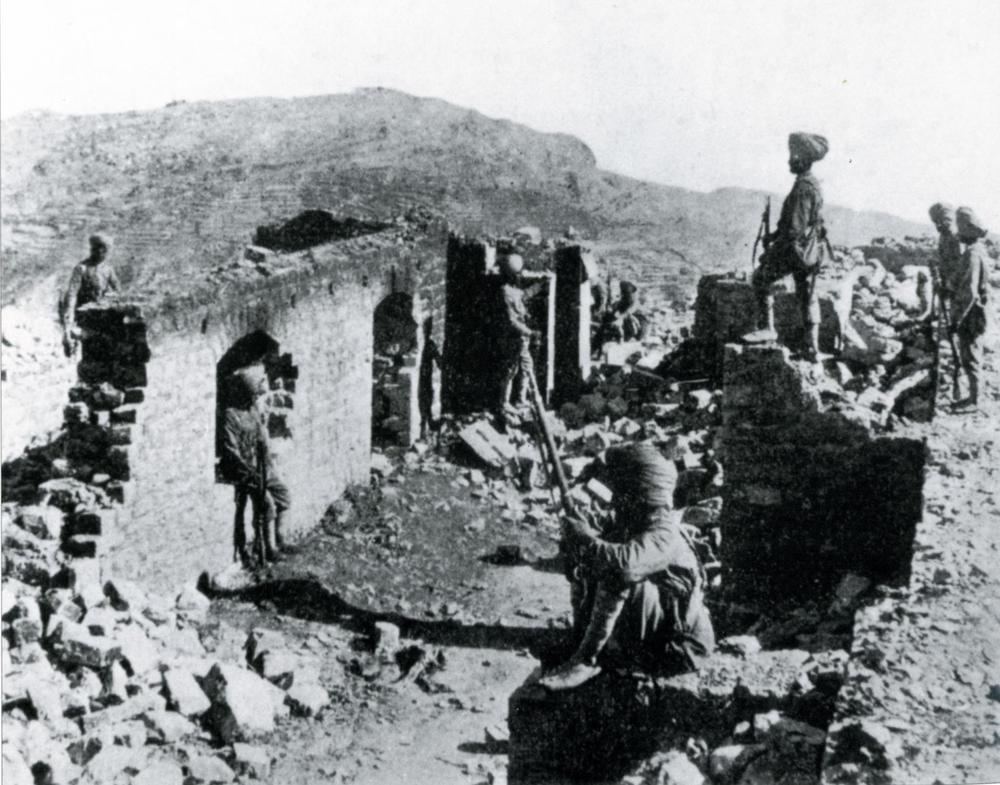